A Retrospection: Why Did It Begin With Potatoes?

A couple of readers have asked about why the blog’s title is: It Began With Potatoes. A few more are on their way to starting their own blog, (I’m cheering you guys on wholeheartedly!) or already have an established blog. (Leslie’s blog here: [1]) So, this article aims to explain my title (Potatoes?) and hopefully give a little push to those of you that have yet to find the time to write; because as you’ll learn, there’s never really a good reason to start. Thankfully, in any fun endeavor, there are always stories and people that accompany the journey. (First article: Potatoes: Food or Poisons?)

This is when the first article was made public to the world. An article on glycoalkaloids, poisons found in potato plants, it was the first post here and it was actually fairly brief. Looking back, the article didn’t have much information on it and the page appeared fairly blank. To be sure, this article was written as an afterthought to an experience I had maybe a week prior, so we’ll go back to there.

I had just looked up the values comparing raw potatoes and cooked potatoes for fun. I was at the SLC, sitting at a table in an office, thinking about the next day, and what I had to cook for dinner. Of course, being a lazy college student, one often ponders if there are faster, more nutrient rich solutions to meals.

Unfortunately, where most logical people would think of something commercial, (Soylent! – although it used to come from dubious sources) I thought of going back au natural, and eating the raw potatoes I had at home. (I was also probably a bit too lazy to grab stuff out of the freezer and heat it up.) Thus, an impromptu meal was born and little did I know, so did a lesson in nutrition and enzymatic starches. 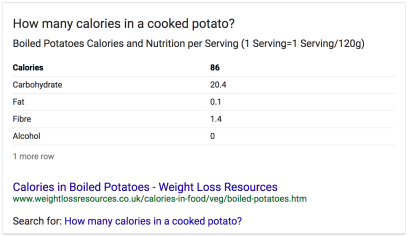 So the next day, I run into MCB 112, the introductory microbiology course here at Berkeley. The early class time, combined with the biting cold wind, make it tough to wake up early, let alone cook a healthy breakfast. However, what normally was a granola bar in my backpack, was replaced with a tin-foil wrapped raw potato. It was slightly green, and with as many eyes on it as a fruit fly has.

Throughout class (I think it was on chemotaxis), I nibbled on edges of the potato. Raw as it was, the potato didn’t even really give off a good taste. In fact, baking potatoes causes the starch (amylose) molecules to expand and absorb water, breaking down the sugar polymer matrix. So to my tongue, whose poor tastebuds had never seen the light of a resistant starch, it tasted bitter. (Possibly also because of a little bit of the glycoalkaloids from the green photosynthetic bits of the potato) So, with a grumbling stomach, and a pitiful breakfast, I set out to on my trek to all my classes and it passed fairly uneventfully until about seven hours later.

As it turns out, raw potatoes are incredibly high in resistant starches. [3] What that means for my digestion was that large bits of potato happily floated through my stomach, through my small intestine, and through my large intestine, resistant to all means of breakdown. In other words, my stool was as hard as a rock (or a raw potato) and it was a miserable experience. Because my body couldn’t breakdown the sugar into monomers as it was, all I was left with was a little bit of pain, a really strange experience, and a healthy dose of “experiments on your body may be detrimental to your health”. I put the thought to rest about an hour later, with no further comment on my wellbeing at that moment.

So ultimately, I was sitting in an office, thinking about all the great things I could write on. I came up on this idea, (of course it was well imprinted into my memory) but didn’t want to embarrass myself with this story as it was my first article. What actually came out of my thinking and writing was a short piece on glycoalkaloids, fairly measured, altogether normal, and just a solid short piece. (Potatoes: Food or Poisons?)

So just to conclude, writing doesn’t require some extraordinary catalyst to begin. I certainly am not perfect at it, (as I come back to edit typos and grammar out, re-read some of my less savory pieces etc.) but I highly encourage you to write if you haven’t found time. It its somewhat cathartic and I hope that you find it as enjoyable as I do. So, to those of you wondering where my title came from, it literally began with potatoes.